You are here: Home1 / Uncategorized2 / “Civil Society and its Impact on the Anti-Corruption Measures in...

Since the Revolution of Dignity (winter 2014-15), Ukraine has once more experienced an increase in non-state activism. The Ukrainian civil society seems to be much more motivated and eventually making progress compared to the 2004 Orange Revolution. At that time, civil activism was short-lived and virtually vanished after the first wave of enthusiasm. Thus, domestic and foreign support is needed in order to keep and explore the potential of the current wave. 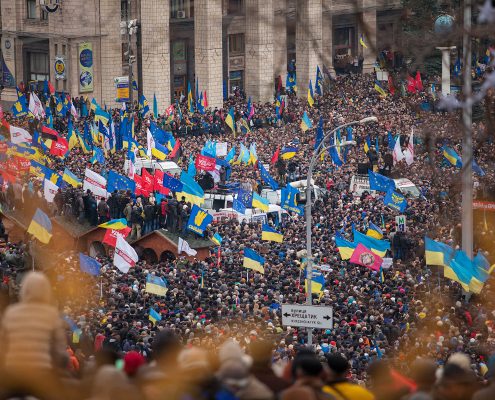 How strong is Ukrainian civil society?

According to German political scientist Susanne Steward, the available figures for 2015 show 76 000 Non-Governmental Organizations (NGOs) – of which many seem to exist just on paper – plus 16 000 charity organizations. The numbers are not very impressive if we compare them with a consolidated democracy of a similar size, such as France with 1.3 million NGOs operating there.

Ukrainian NGOs are visible in Kiev but weakly developed in most other regions. The majority of NGOs rely on volunteers who are mostly students. Despite of their high motivation, they sometimes have only a low level of professionalism, let alone experience. The good news is that the instruments available to civil society have increased compared to 2010. Nowadays there are new legal, political and medial tools.

Civil society and its influence on reforms

The present civil society seems to be well aware of the various challenges which the Ukrainian state and society are facing: the fight against corruption, the reduction of the oligarch’s impact on politics and the still missing establishment of an independent judicial system.

Ukrainian NGOs eventually started to play an important role in the reform process. They not only monitor the implementation of the new legislation, but also provide the state organs with their expertise und propose specific laws. Additionally, they provide a breeding ground for future cadres of civil service and political parties by educating and employing a well-educated potential future élite.

Corruption is fought in stronger alliance

Fighting corruption in Ukraine is nothing new for civil activists. They are many organizations such as the Anti-Corruption Action Center, TI Ukraine, the platform Our Money and media project Schemes which started having a reputation already before the Revolution of Dignity. One of the Maidan II achievements was the emergence of a strong alliance of civic groups focusing on the fight against corruption. The most prominent example is the Reanimation Package of Reforms (RPR), a civil platform which gathers more than 50 groups and is involved in the preparation of anti-corruption reforms. These comprise such important legal acts as the Law on the Anti-Corruption Strategy for 2014-2017, the Law on the Prevention of Corruption, and the Law on the National Anti-Corruption Bureau of Ukraine.

There is also an interesting analytical online platform, VoxUkraine, founded and managed by a group of economists and lawyers. They provide analysis and commentary on many reform topics, among others on the anti-corruption reform. The platform has already become an important information resource both for policymakers and the media.

Corruption is no longer met with silence

The other important success of Maidan II is that corruption deeds are no longer silent. One of the country’s most active anti-corruption NGOs, the Anti-Corruption Action Center (AntAC), provided evidence. Based on their initiative, the Prosecutor General Office (PGO) opened criminal proceedings against former President Victor Yanukovych and his inner circle.

Furthermore, there are also media initiatives launched by civil society such as TV (i.e. hromadske.tv), social media (Euromaidan Press) and independent platforms for press conferences (Ukrainian Crisis Center). This alternative information outlet on the abuses of power seems to be very important in a country where the media landscape is still dominated by oligarchs and selective information broadcasting. Several cases launched the National Anti-Corruption Bureau are the result of investigations by journalists of two TV Programs: Schemes (Radio Svoboda/UA: Frist TV channel) and Lustrator (2+2 channel).

The cooperation between civic groups and public authorities bear first fruit. By February 2016 the National Anti-Corruption Bureau launched 56 criminal investigations. One quarter of these proceedings is based on information provided by legal entities and private individuals.

The cooperation of social society with the state is improving but there are still hurdles to overcome. The state apparatus still treats NGOs with a certain reserve or even annoyance. The´former Prosecutor General Viktor Shokin has opened against the AntAC an embezzlement case on the money allocated by the U.S. government for reforming the prosecution service. The current prosecutor keeps the case open. “We estimate that heads of PGO intend to revenge AntAC for criticizing them and to get rid of us as an irritating factor” explains Vitaliy Shabunin, head of the board of AntAC.

Why is a robust civil society important for democracy and business?

The Ukrainian civil society is progressing but still faces some challenges. One of them is insufficient (state) financing. The resulting threat is that it could be captured or instrumentalized by oligarchs if it were dependent on private funding. Thus, foreign support is an important option. The involvement of public and private aid could include the support of change agents such as NGOs and experts providing opinions on anti-corruption reform possibilities in vital sectors for state and business. Implemented reforms could help to create a less corrupt and more transparent and fair business environment. Thus, investments and trade with Ukraine would be safer and predictable, likely to lead to an increase of foreign direct investments.

Eurasia Group Report: what are the most significant geopolitical risks for ...
Scroll to top